› Civil Rights › Can I Sue For A Police Dog Bite Injury? 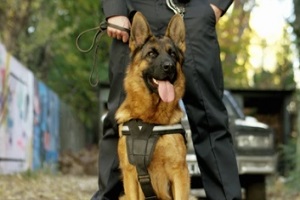 Seeing a police dog arrive on a scene can cause a sense of fear and uncertainty for anyone, but especially an individual who is directly engaging with police. Police dogs, commonly referred to as K-9 units as a simpler shortening of the word “canine,” make up a small portion of law enforcement.

Unlike their handlers, they are not bound to the same standards of behavior that define how police officers should engage with the public. However, the officer in charge of controlling the dog is still liable for his or her behavior in addition to that of their K-9 companion, which means that if you have been bitten by a police dog, you may still be able to sue for damages.

Why And When Are Police Dogs Used?

Police dogs are commonly used due to their strength, sense of smell and speed, which can in many cases outstrip that of a human officer. K-9 units are adept at chasing suspects and stripping them of potential advantages such as hiding in darkness, which helps to keep human officers safer.

Police dogs are also used to directly assist officers, such as if one responding officer is struggling to contain a suspect; a K-9 unit may be released to help bring the suspect to the ground where he or she can be safely subdued.

Police dogs carry impressive bite forces, which means that they should not be released in situations in which a simpler solution is sufficient. This is why some cases of a police dog bite injury still pose legal issues for police departments who can be sued if their K-9 unit was dispatched when it did not reasonably need to be.

When Excessive Force Comes Into Play

The primary means of suing a police department for a K-9 unit bite comes from a claim of excessive force. The concept of excessive force rides on police officers’ duty to diffuse a situation in the least aggressive way possible, beginning with verbal interactions and commands and escalating to non-aggressive physical force before proceeding to the use of non-lethal weapons and tools like tasers.

A police dog can cause severe injury due to the biting and resulting tearing from its sharp teeth, which means that a K-9 unit should not be dispatched when other, less aggressive methods can resolve the situation at hand.

Some types of police dogs are also more inclined to cause a police dog bite injury; while German Shepherds are perhaps most commonly associated with the role of a K-9 unit, the Belgian Malinois is another frequent choice, and these animals have been shown to bite more frequently than their counterparts from other breeds. 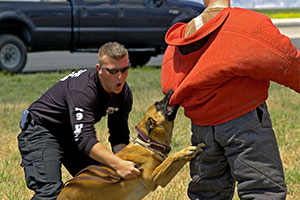 With a bite force of almost 2,000 pounds per square inch, K-9s can deliver a dangerous attack, meaning that they should be used sparingly. When the interest at stake—that is, the urgency of bringing a suspect under arrest or subduing the individual—does not match the potential nature and quality of the response of using a police dog, an individual may bring a claim of excessive force.

To put it simply, if a person’s actions did not warrant receiving a police dog bite injury and the law enforcement handler acted more urgently than was necessary, they may be liable for excessive force charges when the dog injures someone.

Many people wonder why police dogs are not held to the same standard as the public, in which an individual is liable for injuries caused by their dog. The police have been granted an exception to dog bite statutes; however, there are some limited scenarios in which these rules may still apply.

If a police dog dispatched on a scene attacks a bystander or victim on accident, the officer may still be responsible under civil liability. Off-duty dogs are also liable; a police K-9 is only protected from dog bite statutes while it is on the job, and any attacks outside of the scope of its normal work or while off duty are not protected as members of the police force.

Work With Experienced Attorneys To Defend Your Rights

If you have been bitten by a police dog and are wondering if you can sue to reclaim damages for a police dog bite injury, it is important that you reach out to a legal professional as soon as possible after the incident so that evidence such as photographs of the injury can be collected in a timely manner.

The attorneys at The Brown Firm can help you to understand whether you were a victim of excessive force as a result of a K-9 unit and what your options are. Reach out to schedule a consultation with one of our Virginia civil rights attorneys today.